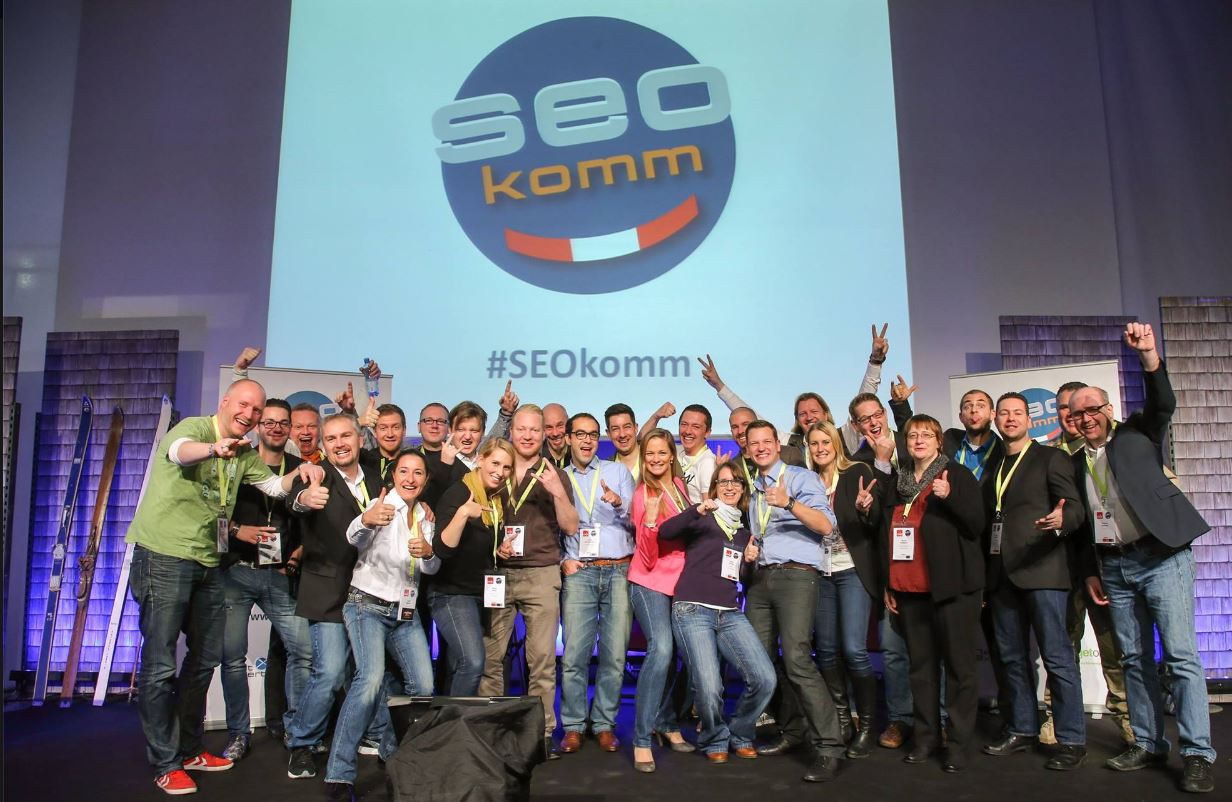 The conference for search engine optimization SEOkomm has become a fixed part of my schedule and participation is an absolute must. So much concentrated SEO competence in one place should not be missed! To do justice to the abundance of information I took two of my colleagues with me this year.

We started on Friday with Marcus Tandler from Tandler Doerje Partner and OnPage.org with the topic “404 – Keynote not found”. It was about the rapid development of Google and how the search engine manages to find the right result for the searcher. Furthermore Tandler described which onpage factors improve the ranking. The topic of the lecture was as announced brand new and really interesting.

How to manage an SEO agency

Afterwards, we continued directly with the Track 2 SEO Strategy with the presentation by Sebastian Erlhofer from mindshape GmbH. This was not primarily about SEO, but how to manage an SEO agency. Especially when you start as a freelancer and then grow, the question of how to organize internal processes inevitably arises. Erlhofer shared his experiences with us and had some best practice tips for the everyday life of an SEO agency in store.

He showed that he divides all projects into phases, subdivides them into processes and these processes into sub-processes. However, one should not structure everything, but leave room for development and individual requirements. In my opinion, this is particularly important in the dynamic environment in which we operate.

I also liked the idea that all employees collect know-how and write it down in one place. At certain intervals, the team takes a look at the to dos and considers how to test, implement and further develop them. Instead of occasionally turning know-how development into a fixed component that eats up less capacity because of the time constraints.

This was not only about internal processes, but also about conveying to customers what actually has to be done in terms of organisation to get a project up and running. Hours that are incurred but often cannot be invoiced.

Sebastian Erlhofer also rightly cited time management as one of the most important components for creating a suitable process environment. The presented “Lego calendar” sounds like a promising possibility to creatively tackle the challenge of time management.

Manuela Schöpfer knew a lot about online content marketing in online shops. The team leader Digital Media at DM Drogerie Markt Österreich knows exactly how to stand out from the competition with digital stories about lipstick, hygiene products and co. A very interesting lecture, from which I was able to take some new insights.

One of my employees attended the lecture “Relaunch using the example of Salzburg.com” at the same time. Here David Radicke comprehensively described the typical stumbling blocks of a relaunch of online newspapers and gave clear best practice tips. Numerous content snippets, as well as vast amounts of duplicate URL paths and the lack of content linking are only a small part of the common SEO problems of online newspapers. The question of how to deal with the DC problem was given special attention during the presentation. He described the widespread use of Canonical Tags only as a band-aid for the “SEO wound” Duplicate Content, but not as a suitable solution. Care should also be taken when deleting duplicate URLs, as this can lead to unwanted side effects due to backlinks and bookmarks, for example. It is best to work with an individual mix of 301 redirects, 404 or 410 status codes or disavows.

EO Controlling, that sounds rather dry at first, but it is essential in everyday SEO. The founder and managing director of takevalue Consulting GmbH Jens Fauldrath is an absolute expert in this field. He reported in the lecture “SEO Controlling – so important and yet underestimated” about the best approaches and tools for controlling tasks. Fauldrath understood how to captivate the audience and provide us with an incredible amount of information in a limited amount of time, although it was not always easy to understand him at this pace. Not for nothing did he end up winning the Oscar for the fastest speaker.

Bastian Grimm’s Page Speed talk was packed with details and information. Bastian Grimm has valuable information about prefetching and prerendering. By preloading upcoming pages or whole websites, a lot of loading time can be saved. We consider these measures as interesting measures to optimize loading times especially for online shops. In addition, two new image formats “WebP” and “Brotli” were introduced, which have only worked to a limited extent so far, but whose development should definitely be monitored further.

After a well-deserved lunch break, during which the numerous new information and tips could be collected, it continued on Track 1 SEO Hardcore with Jan Hendrik Merlin Jacob from OnPage.org. “Crawl Budget Best Practices” was the topic of his contribution. For my taste the talk was too much about the basics, as it was on the Hardcore Track. A relatively new aspect was the topic AngularJS, as it is still quite new and Google still has its problems with crawling, as John Müller from Google confirmed in the next track.

Parallel to this, Karl Kratz gave his lecture on “Alternative Search Engines”, which clearly demonstrated that Google is probably the worst search engine even for special topics. As SEO one should not only optimize on Google keywords, but especially on the needs of the searcher. The most important consideration here is which search engine users turn to with their needs? Search engines like Amazon, Wikipedia, Yelp, Lieferheld, and especially language search engines like Siri should not be ignored.

After that Johannes Müller followed on the SEO Hardcore Track. This was the chance to check out Google personally. Mueller is since 2007 Webmaster Trend Analyst at Google in Zurich. On the hot seat he had to ask himself some questions. I thought it was great that John Müller answered our questions and stayed at the networking party until late into the night.

What was particularly interesting was that when asked about links, he did not give the impression that Google actually intended to abolish this factor. No, links are still a strong ranking factor!

He also confirmed again that hreflang does not replace the Canonical Tag but that these two awards work very well together as long as the Canonical Tag does not contradict the hreflang. Especially interesting in connection with language variants was also the remark of a conference participant to regulate a redirect, not as suggested by Mr. Müller, by a 302 redirect, but by a 303 redirect.

Exploit the full potential of Google Analytics and the Screaming Frog

The penultimate item on the agenda of SEOkomm 2015 came from Markus Vollmert of luna-park GmbH. In his lecture “Google Analytics for SEOs” Vollmert reported about the possibilities that analytics offers to SEOs and which potentials remain mostly unused. A lot of things seemed familiar from the Google Analytics courses, but the examples of applications Vollmert provided were very helpful.

The last item on the day’s agenda was the lecture “Screaming Frog Tricks you didn’t know yet” by Mario Träger from Webworks. This talk was peppered with interesting information and tricks that once again proved what an all-rounder Screaming Frog SEO Spider is. Due to the limited time, not all but very interesting areas of application of the tool were presented:

All in all, hats off to the organizers of SEOkomm 2015! The day was packed with exciting and interesting presentations. We will first talk about our newly gained impulses as a team and then plan how some things will find their way directly into practice.

The SEOkomm was, is and remains for me the most important German-speaking SEO conference and we are already looking forward to the SEOkomm 2016 which takes place on 18.11.2016!