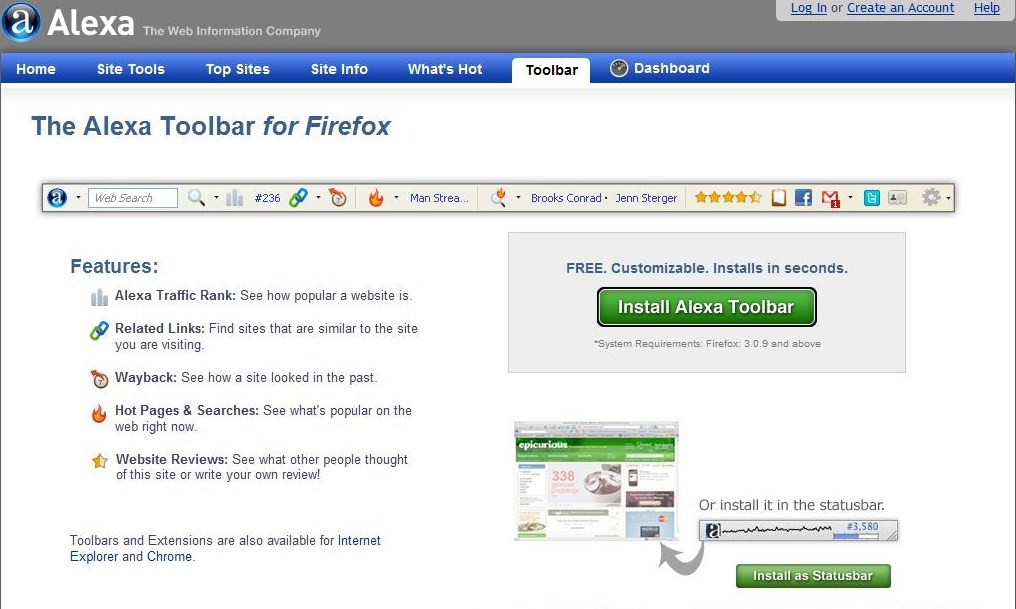 Why the Alexa Rank and Tool Rage dazzle

Alexa undoubtedly offers great tools and possibilities, the free toolbar is useful and manageable. But I recently thought about the Alexa Rank and I have my doubts about it. And because chance would have it so, I am receiving a newsletter from an internet service provider right now:

„.. Alexa is the unique ranking evaluation company that is considered by all popular and big search engines such as Google, Yahoo! and Bing. A high rank among the Alexa World ranking results is a good proof that this web site is interactive and has a good number of visitors. In normal conditions, it is very difficult for a web site to raise in the world ranking list and it requires a lot of work and operation. You need to pay”

He is certainly right that the Alexa Rank has become a greatness in the SEO industry – besides the page rank (which is losing more and more importance), the number of backlinks (also not a reliable statement) and the visibility index of Sistrix to measure the value of a page. The latter has become the industry internal page rank of that time, while the page rank was an important measure at that time, the visibility index is important, but in my opinion overrated. What does the Alexa Rank count for us SEO’s, SEO agencies, webmasters, online marketers and backlinkers? Is it difficult to influence it and how does it influence the ranking factors at Google?

In short – What makes the Alexa Rank?

Now let’s take a look at what the Alexa Rank actually is and what makes it what it is: Alexa, developed in 1993, was swallowed by the internet giant Amazon in 1999. Now, as a subsidiary, Alexa is a kind of search engine and catalogue. The toolbar is mainly represented in the English-speaking and Asian regions (and in this country partly among SEOs and Internet marketers). The Alexa Rank evaluates visitor numbers and assigns the rank – whereby smaller is better. A rank below 50.000 is a fine thing and convinces many a merchant that an advertising campaign on this site is useful and worthwhile.

The author of the newsletter believes that much work is needed to improve the Alexa Rank.

Can you optimize the Alexa Rank yourself?

Either way: The Alexa rank rises – in the second case however faster, at least in this country.

As you can see the Alexa Rank is easier to influence than the Page Rank or most other SEO metrics. Google may have already gotten wind of this. Will the clever giant rely on such a metric?! Doubtful! Here in German-speaking countries a bad Alexa Rank does not say much. So if I only look at the Alexa Rank, the Page Rank and the number of backlinks, I inevitably come to misjudgements.

The Sistrix visibility index may be a bit more meaningful, but you can also optimize it without actually having relevant rankings. Like Alexa, many tools bite their teeth at foreign sites, so that even the page rank is still the better reference point.

Where to go with the SEO metrics?

Now it is time to go sleeves up and deeper into the matter. That means, good old handicraft: look at the backlinks, maybe even the backlinks of the backlinks. Then it’s best to also look at the outgoing links and the history of the site, the rankings are just as important.

Conclusion: Metrics or not, they all represent only a part of reality and this can lead to fatal misjudgements. Don’t get me wrong, I think SEO tools are great and make my work much easier. I am a big fan of e.g. SEOlytics and Majesticseo or the SEObook. But you really have to be careful that you look a bit closer, balance data against each other and don’t let yourself be blinded by the page or Alexa Rank.

What is your opinion

Which of you has the impression she immediately recognizes whether the Alexa Rank has been manipulated? Who of you has the impression that a good Alexa Rank increases the sales value and who thinks that in this country has no influence on the reputation of a site and its value? Who of you makes his decisions dependent on tools and otherwise does not look further because the customers are only interested in the Google Page Rank – respectively the Alexa Rank – anyway?

I look forward to your comments, experiences and opinions.